A Community from Nature Portfolio
Nature Comms
Behind the Paper

We have investigated the isotropy of space-time with accurate quantum metrology in a single trapped ion. By comparing atomic orbitals with orthogonal orientation over a 5-week period, we reach world-record sensitivity to a violation of Lorentz symmetry for electrons and photons.
Laura Dreissen
Postdoctoral fellow, Physikalisch-Technische Bundesanstalt
Follow
Like Liked by Evelina Satkevic and 1 other
0

Nature Communications - Breaking of Lorentz symmetry is related to the unification of fundamental forces and the extension of the standard model. Here the authors provide updated bounds on the...

Michelson and Morley already showed more than 100 years ago that light travels at a fixed speed, independent of its propagation direction [1]. But is this basic principle true at all energies and for all particles? Does an electron with a given energy travel at the same speed in every direction? Novel theories that attempt to unify the four fundamental forces, suggest that this so-called Lorentz symmetry may be violated [2]. We have investigated the validity of this principle with world-record precision in a trapped ytterbium (Yb) ion.

Electrons bound in atoms move along orbitals, which can be oriented in space with respect to a quantization magnetic field. Depending on the exact energy state, such orbitals are oriented nearly orthogonally to each other, see Fig. 1. If Lorentz symmetry would be violated and the energy of the electron would be dependent on its propagation direction, then this would induce a small energy shift between two orthogonal orbitals [3].

We search for such energy shifts in the 2F7/2 state of the Yb+ ion, as it has been shown that its orbitals are especially sensitive to a violation of Lorentz symmetry [3]. The ion is trapped in our laboratory using radiofrequency (rf) electric fields. We apply a magnetic field along a well-defined direction to fix the orientation of the atomic orbitals in our laboratory. However, their absolute orientation in the universe changes together with Earth’s rotation. Therefore, Lorentz violation would manifest itself as a modulation of the energy difference between two orthogonally oriented orbitals at Earth’s rotation period (23.9345 hours).

We compare the orbitals in the 2F7/2 state with rf spectroscopy [4]. In spectroscopic measurements, photons interact with electrons and, therefore, we can search for Lorentz violation of both these two particles. From previous investigations [5], we know that a possible energy shift due to Lorentz violation would be much smaller than the typical energy shifts induced by fluctuations of the magnetic field environment. Therefore, a tailored rf pulse sequence was used that dynamically manipulates the quantum state and suppresses the influence from magnetic field noise [4]. This enables interrogation times of several seconds before magnetic field noise influences the measurement. At such a long interrogation time, we also benefit from the high energy resolution that is reached.

In order to accurately test Lorentz symmetry, a (nearly) continues operation of the experiment over the course of several weeks is required. Therefore, we have implemented measurement sequences that make our experiment robust against changes in the environment. We populate the science (2F7/2) state, with laser excitation from the ground state via the highly forbidden electric octupole transition [6]. The resonance of this transition is narrow and its center frequency is highly sensitive to the magnetic field. Already very small variations of the magnetic field will shift the line out of resonance. We applied a fully automatized sequence to follow the resonance frequency throughout the measurement campaign and, in this manner, retain a good population transfer. Once the ion is in the 2F7/2 state, the rf sequence is applied to compare its orbitals and search for Lorentz violation. The specific sequence used in this experiment was especially robust against changes in the magnetic field and the interaction field [7]. Therefore, a proper signal could be obtained, even under somewhat unstable environmental conditions.

Data was acquired over a period of 5 weeks, and the experiment was running for 70% of this time. The data was fitted to search for signals at the modulation frequency of Earth’s rotation, but no significant signature was found. However, from our data we were able to exclude a violation of Lorentz symmetry for electrons and photons at world-record accuracy. The measurement principle can be extended to multiple ions in the same trap for a higher sensitivity to Lorentz violation and continue the search for new physics. Stay tuned! 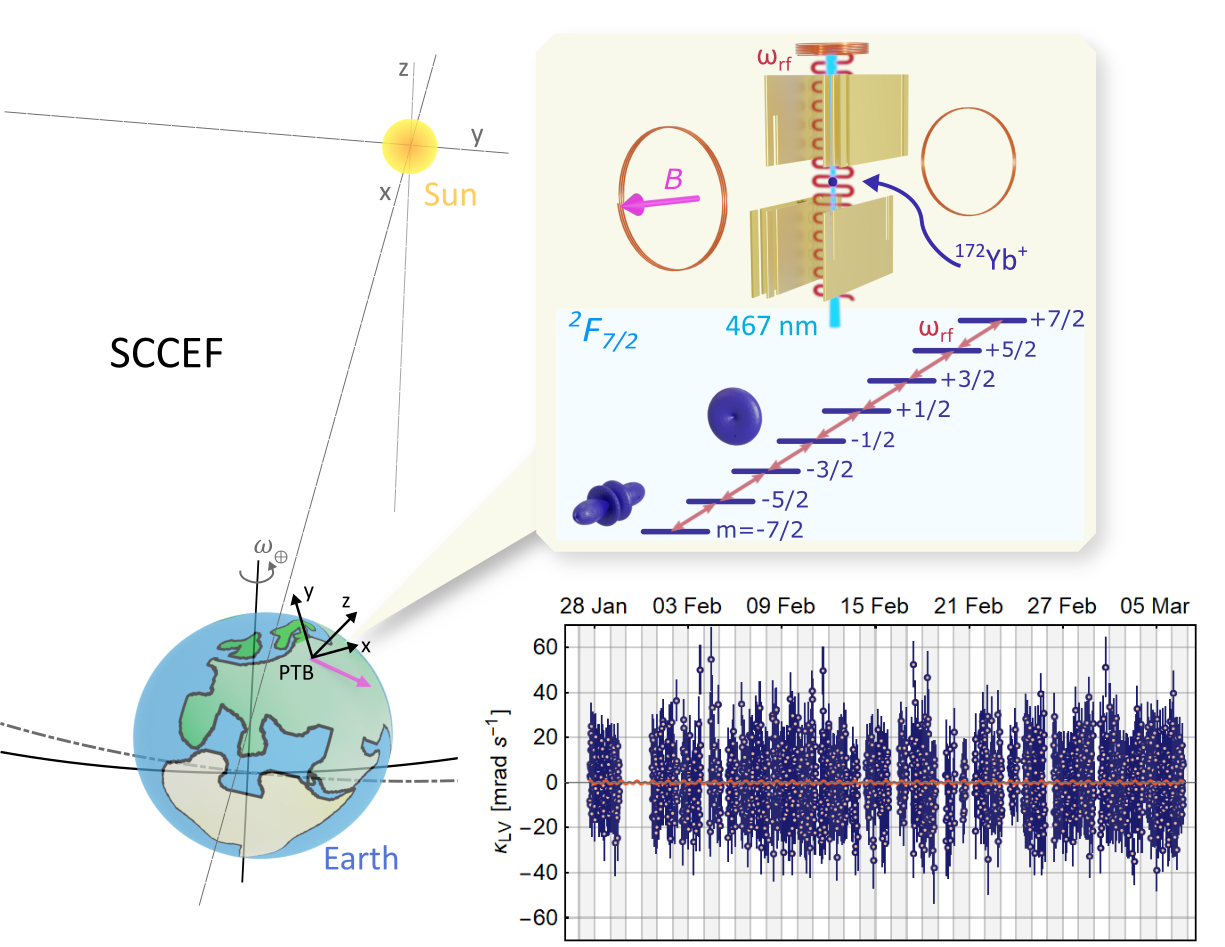 We have investigated the isotropy of space-time with accurate quantum metrology in a single trapped ion. By comparing atomic orbitals with orthogonal orientation over a 5-week period, we reach world-record sensitivity to a violation of Lorentz symmetry for electrons and photons.