A Community from Nature Portfolio
npj Quantum Info
Behind the Paper

We show that, contrary to the widely established paradigm, diffusion at the nano-scale causes magnetic field correlations to decay as a power law rather than exponentially, with significant implications on spectral resolution in nano-scale NMR, and even challenging the very notion of diffusion time.
Santiago Oviedo-Casado, Genko Genov, Anjusha Vijayakumar Sreeja, Nicolas Staudenmaier, Physics Community & Daniel Cohen
6 contributors
Like Liked by Evelina Satkevic and 4 others
0

Precise measurements of physical quantities are important for understanding nature, and are essential for everyday life. Most measurement schemes use the principles of classical physics, although precision is ultimately limited by quantum mechanics. Recent developments of quantum technologies have shown promise to improve significantly various aspects of life. Among them, quantum sensing, which consists in the detection of signals and measurement of physical quantities using quantum sensors, shows an efficiency that can often surpass the one achieved by their classical counterparts. However, advantages in the quantum realm usually come with the price tag of an increased complexity in design and operation.

Nuclear magnetic resonance (NMR) at the nanometre scale, usually dubbed as Nano-NMR, allows performing NMR experiments on tiny volumes of samples by using quantum sensors, making it possible to get rid of, depending on the quantum sensor employed, the huge magnetic fields, cryogenic temperatures, or highly concentrated samples required by classical NMR. One important application relies on statistical polarisation of small samples for improved signal detection. The principle is straightforward - we place a small number (nano-sized, hence Nano-NMR) of nuclei sufficiently close to a quantum sensor. Due to statistical fluctuations,a non-zero magnetic field will usually be present, as the nuclei will have different orientations but cannot cancel completely each other's polarisation on account of their typically small number. If the quantum sensor is a spin, it couples to the nuclei through this magnetic field, and the state of the spin will change according to the variation of the field. A wisely chosen detection spin can be controlled and measured, thus obtaining information about the nuclei, similarly to standard nuclear magnetic resonance.

The main challenge is the requirement that nuclei should be close to the sensor and not change their overall magnetisation during one measurement. For liquid samples this is a problem, as diffusion tends to both disorient the nuclei, and pull them apart. Both effects mean that the magnetic field source of the signal measured in the quantum probe tends to average to zero the longer a measurement is, eventually becoming pure noise and no longer rendering any information about the sample. The commonly accepted paradigm is that nuclei within a hemisphere with a radius similar to the distance of the quantum probe to the surface of the sensor contribute to the measured signal. This is due to the weak interaction of the sensor with the sample, so that only those nuclei within this small region are close enough to contribute. The profound implication of this hard cut-off assumption is that the signal that can be measured with the quantum probe vanishes at long times and its detection requires complicated experimental procedures, which are often not desired or can be impossible to implement.

A recent, careful analysis by a collaboration of several teams has shown that the hard cut-off is but a crude approximation [1], and that the nuclear contribution to the signal even with diminishing strength at whichever distance they are from the probe, has important consequences: a signal whose decay follows a power law at long times [see figure 1(a)]. The implications are profound, as it is through modelling of the signal that parameters of the sample such as the diffusion coefficient are estimated. Moreover, the decay of the signal causes broadening of the spectral lines, reducing the precision of frequency estimation. If the decay is exponential, the broadening fundamentally limits the ability to resolve close frequencies. However, this is not necessarily true for the power law decay, where a small, non-zero signal at longer times allows for improved resolution. However, the power law decay has not been observed experimentally yet, mainly due to experimental noise that masks the expected tiny signal at long times.

Our choice of nano-NMR sensor is the Nitrogen Vacancy centre in diamond (NV centre) - two adjacent defects in the carbon matrix that behave as an electron spin and whose properties and controllability make it an almost ideal quantum sensor. We performed three different experiments in which a liquid sample was located on top of the diamond, which features an NV centre close (a few nm deep) to the surface. Carefully monitoring the NV centre we can detect the magnetic field from the Nano-sized sample with great accuracy, and thus study the particular model that best describes its decay.

We used correlation spectroscopy [2] on two of these experiments, as it directly measures the correlated quantum phases at two interrogation times, separated by a time T + Nτ each [see figure 1 (b)]. This allows us to directly characterise the decay of the magnetic field. By extending the measurements much beyond the typical time of exponential decay we were able to demonstrate that correlations indeed survive beyond such time, validating the power law model which better describes the signals that we obtained [figure 2]. The distinction between the two experiments is that while one used a single NV centre and measures protons, the other uses an ensemble of NV centres and measures fluorine nuclei, with which we can rule out the signal from the tiny immobile water layer absorbed on the diamond surface, thereby avoiding surface effects.

In the third experiment, we used a quantum heterodyne detection protocol [see figure 1 (c)] [3]. Then, the individual measurements are synchronised with a classical clock, so the NV centre can directly encode and follow the expected oscillations of the magnetic field even beyond its coherence time. This is challenging to implement, mainly due to the small number of detected photons per measurement, but is more accurate, yielding better precision in parameter estimation. By comparing the results with extensive numerical molecular dynamics simulations of data generated with both the exponential and power- law models we were able to show that our results are only compatible with the latter, further confirming our hypothesis of power law decay [figure 3].

In summary, our work characterises experimentally how diffusion impacts Nano-NMR precision and resolution capabilities, confirming our hypothesis of a power law decay of the signal, and opening the door to, among many other applications, determining with accuracy the diffusion coefficient on the nanometre scale. 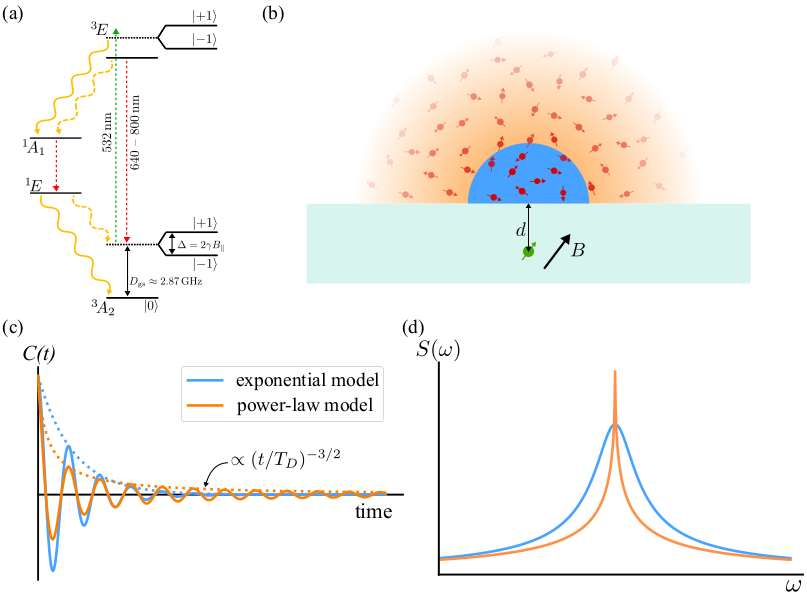 We show that, contrary to the widely established paradigm, diffusion at the nano-scale causes magnetic field correlations to decay as a power law rather than exponentially, with significant implications on spectral resolution in nano-scale NMR, and even challenging the very notion of diffusion time.